Finally, the mini (20 tons) hydraulic press is finished! I sincerely hope 20t will be enough, but after downloading plans for a full hydraulic press, a 75lb air hammer, a mechanical power hammer, and a McDonald rolling mill, I realized than all those designs would require more time, knowledge and money than I have at my disposal currently. Hence I opted for an air over hydraulic press. You can find photos on this address http://www.knivesplus.com/minihydraulicpress.html
a full discussion of several isssues, and more photos here http://forums.dfoggknives.com/index.php?showtopic=9932
and some videos of it in operation here http://www.youtube.com/watch?v=qwZ-GYUZZEY. 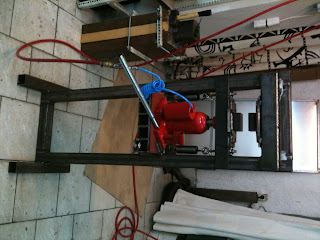 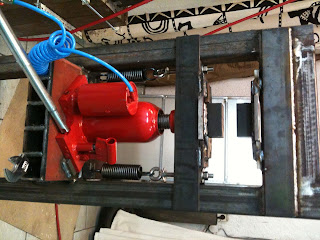 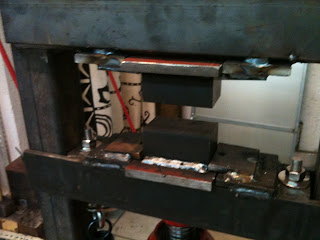 Total cost was about 1000 Euros, which appears pretty steep, until you start checking prices for used hydraulic presses (I got quotes in the range of 3000-4000 Euros)... Around 550 Euros is the cost for a single phase, 3hp, 100lt air compressor, 300 Euros for the air over hydraulic jack (the brand is Mega, which is Spanish I think), and another 150 Euros for the steel frame, return springs, and various odds and ends. Plus I was really lucky to have a friend who is a professional welder TIG the whole thing together (took us 6 hours, cost me nothing but gratitude to said friend, and about two hours of post midnight excruciating eye pain due to welder's eye...).
Also I figured I could also use the air compressor to build a small air hammer in the future.

Right now, since my cheap Chinese belt grinder went kaputt, the next project is to build a proper belt grinder... and THEN I might actually get to doing some real swordsmithing work. Last quote I got for a 1.5 hp belt grinder was over 1000 Euros, so I guess I will have to build that myself as well. Oh well...
Αναρτήθηκε από athanaz στις 9:44 PM No comments:

Again, since I have little to show in terms of my work (day job having taken over for the last few days), here is an excellent video on proper sword etiquette by Grey Doffin of the JSSUS (once you see it, make sure you load the second part as well).
Sword etiquette is really important; many times, non Japanese people just go grabbing a sword, touching the blade, waving it around, etc. I have even had people bang a blade of mine on a bench to see if it was really hard...
Even an amateur blade made by a gaijin like  myself does not deserve such treatment!
Such behavior, apart from being really rude, could also be dangerous. A Japanese sword is basically a really long shaving razor... not to talk about all the spiritual aspects, which is another subject completely.
The video is pretty long, and might be tedious for some people, but it goes to show how complex the subject really is.
Αναρτήθηκε από athanaz στις 10:38 AM No comments:

Still not much time to work as I was out of town for a few days, so once again I'm only posting a link.
I recently started Iaido at one of the best schools here, http://furyu-dojo.org/en/, in order, both to get an understanding of how a sword is to be used, as well as to be able to legally make one (swords here are considered weapons by the law, essentially indistinguishable from firearms).
The video link is from a different iaido school than the one I am attending, but at that level of expertise that does not matter much.
Αναρτήθηκε από athanaz στις 7:18 PM No comments:

Not enough time to work, so not much to show. I have actually been working on building a 20t forging press and experimenting at making mokume gane, but more on that when I am finished.
For the time being, here is some eye candy...
from an excellent site I came upon. Enjoy!